By MainStreetTales2 on May 7, 2013 in Adults Only Trips, Flying Fish, Reviews
Today we review of one of the signature restaurants my husband and I ate at on our last adults’ only trip-The Flying Fish! I actually dined here for the first time ever last January. It was so good, I insisted we go back last week. Flying Fish is located on the Boardwalk, next to the Boardwalk Inn.
The theming inside continues on with the Boardwalk but in a bit more whimsical yet contemporary style. We requested to be towards the back in an effort to avoid children at a late dinner. The area we sat in felt like you were inside a Circus tent but in an understated way. We were celebrating our anniversary this trip and it was noted on our reservation. They had special menus printed that said Happy Anniversary! 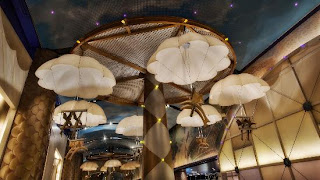 Our server was phenomenal. That is one of the highlights at dining at the signature restaurants at Disney-many have been there for years! Ellen has been with the company for 23 years. She is typically at California Grill but with it being under renovation she requested Flying Fish. She was informative; had great recommendations especially for the wine; and also knew how to pace our meal so we never felt rushed or like we were waiting for our next course.
The wine list was fantastic. What was really great about the wine list here is they allow you to order by the carafe. Often we like a glass(or two) of white and a glass(or two) of red. This was perfect for us as we could share the carafe which was basically like a half bottle.
We started with two appetizers.
Signature Flying Fish Cafe Crisp Jonah Crab Cake – Served with Savory Vegetable, Roasted Red Pepper Coulis and Ancho Chili Remoulade.
Yellowfin Tuna Tartar and Crispy Tempura Tuna Vegetable Sushi Roll – Hijiki and Wakame Seaweed, Yuzu Tobiko, and Wasabi Foam with a sweet and spicy sauce 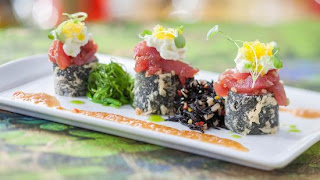 Hands down the Yellowfin Tuna Tartare was the best! I could have had another one of those. It was fresh and melted in your mouth. I love sushi and yellowfin is one of my favorites. Often spicy sauces overpower the fish but not in this case. It was perfectly balanced. 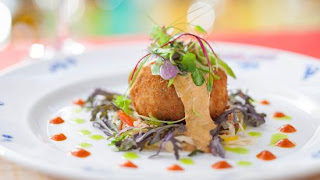 The Jonah Crab Cake is one of their signature dishes. It was good but not exactly what I expected. I know the word crisp is in the name but being on the Boardwalk I expected it to be less crisp.
Upon Ellen’s suggestion, we opted to split a salad and we went with their Caesar salad.
Caesar Salad – Young Red and green romaine leaves, Roasted Garlic dressing, parmigiano Sonoma jack frico and pesto sourdough croutons.
That was a great recommendation as even the half salad portion was quite large. The dressing was especially tasty on this dish.

Next up were our entrees. My husband went with one of their signatures
Signature Flying Fish Cafe Potato-wrapped Red Snapper – Leek Fondue with a veal glace, red wine and Cassis butter reduction
It was wrapped in potatoes that made it appear to be dense but it was actually light. The potatoes definitely added a depth of flavorfulness that was unique to this dish and unlike any other snapper he’s had. The portion was perfect in size. 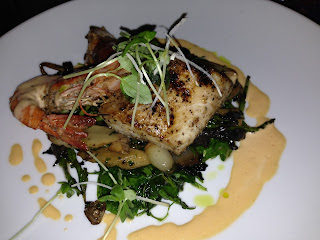 I had their Thunder-Surf and Surf.  This is an option that changes frequently, usually every three to four days due to what fish is in season and available.  This particular evening my entrée had grilled cobia and shrimp. The shrimp were served with their heads on. I’ve had shrimp like this many times, but these were some of the best I have tasted.  They were seasoned with just enough spices. I didn’t really want to share any of this but I did. The cobia was similar to mahi mahi. It was good but the shrimp was so much better it really got overtaken by the shrimp. They should seriously consider a dish of just the shrimp alone.
Between the two entrees, mine was the winner! At this restaurant, I would definitely always try the chef’s special like the Thunder or the Duo. It changes often and is a dish that the chef really can shine at something special.
Sometimes when you are celebrating at a Disney restaurant they will give you something complimentary for dessert. This evening we could have two glasses of champagne or a dessert.  Ellen warned us about the dessert-it was PB&J Crème Brulee. She said stick with the champagne. I am not a bubbly drinker so I didn’t listen. The PB&J Crème Brule is quite possibly the worst dessert I have ever tasted. I have a sweet tooth that just won’t quit. This was awful. When you think PB&J, you think GRAPE jelly. This had blueberry or blackberry jelly, something other than grape. It didn’t taste right. It looked pretty. The chocolates tasted great and the little dropper of chocolate went perfectly with the other dessert we ordered. We also ordered the Caramelized Banana Napoleon – Phyllo, banana mousse, creme caramel and exotic fruit coulis and bitter chocolate. The Banana Napolean definitely made up for the PB&J disaster. The banana mousse was very similar in taste to banana pudding. The layers stayed together as you cut into them.  We did take the chocolate dropper and add it to the bites for a perfect banana chocoloate combo. 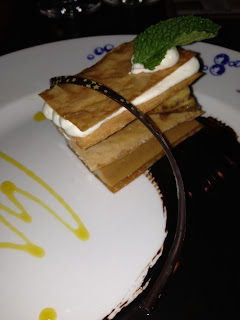 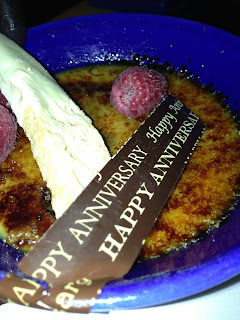 Order the one on the left not the right!
Another fun one that I had before that we didn’t order this evening was the sampler.
Overall, we both really enjoyed Flying Fish. We will definitely return for a date night in the future. It is a place I would take my children but I would go earlier in the evening to be respectful of the other patrons who are enjoying an adult meal later in the evening.